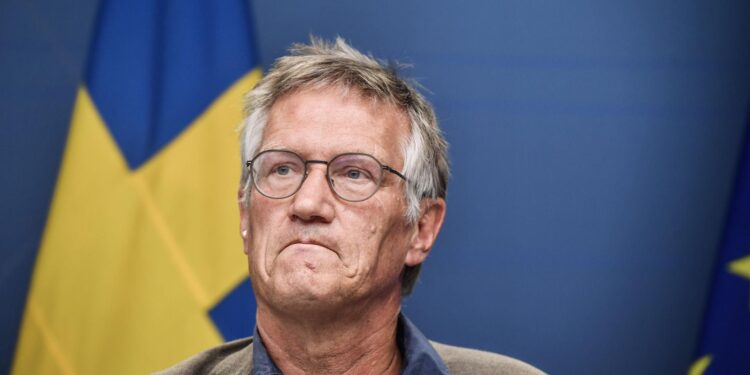 Remember back in 2020 when Sweden was the bad boy of the Covid world? Placed firmly on the naughty step by the WHO, the EU and many national leaders, the Swedes bravely, or stubbornly, ploughed their own furrow. However, by the end of 2020, with the excess death rate in Sweden at 758 per million compared to the minuscule or negative rates in the ‘pin-up’ Nordic countries of Finland, Denmark and Norway (each of which followed WHO and EU orthodoxy) Sweden, and their Chief Epidemiologist, Anders Tegnell, were firmly on the defensive.

How times change! Here we are in 2023, the pandemic rapidly disappearing in the rear-view mirror. But what’s this? The excess date rate in 2022 in both Finland and Norway was higher than Sweden’s in 2020. How can that be, isn’t the pandemic over?

Remind me. Wasn’t 2020 the once-in-a-century pandemic that ravaged the world? When a never-before-seen virus encountered a naïve population, sweeping through country after country. When Sweden, due to the gross pig-headedness of Tegnell and a few colleagues, refused to follow WHO guidance, putting its population at unimagined risk?

Let’s just look at the excess death rate per million for 2020 and 2022 (the data come from Our World in Data):

I’m not trying to necessarily pin the blame on vaccines, I’m just looking at the data. If vaccines were the main culprit of excess deaths in 2022 in Finland, Norway and Denmark, then why aren’t excess deaths in Sweden higher? In fact, as you can see from Figure 1, vaccine uptake is pretty similar in each of these countries. Maybe it’s just Sweden and its people doing their own thing again. Draw your own conclusions about the cause.

No, my point is that no one knows what they’re doing. Don’t trust the experts, they’re as clueless as you and me.

Sweden’s high rate of Covid deaths was certainly, in part, down to some spectacular own goals. In 2020 the Swedes, like the U.K., emptied its hospitals. In the U.K. we sent home tens of thousands of bedridden hospital patients. Many went back to care homes where many staff promptly went off sick. Those left to deal with the deluge were hamstrung by PPE shortages and the necessity to follow PPE protocols. These issues in U.K. care homes exacerbated Covid and all-cause deaths due to conditions such as urinary infections, as can be seen in figure 2. The charts come from the Office for Health Improvement and Disparities. From interviews and reports I’ve read a similar situation developed in Sweden, contributing to its relatively high Covid fatality rate in 2020, with many of the deaths occurring in care homes (something Tegnell later apologised for).

The charts in figure 3, below, show annual cumulative all-cause excess deaths for each of the four Nordic countries. The top chart covers 2020, while the lower one shows all-cause deaths in 2022.

Just for a bit of context, let’s throw the U.K. into the mix. Figure 4 shows that in 2022 U.K. all-cause excess deaths are mid table vis-à-vis the Nordic countries.  Currently, the 12 month cumulative excess death rate in the U.K. is about 60% lower than in Finland in 2022, and about 25% lower than in Norway.

But I thought the U.K.’s terrible level of excess deaths in 2022 was down to not spending enough on health, isn’t that what the BBC and the rest of the mainstream media tell us? Maybe, but Figure 5 shows OECD data on health expenditure as a percentage of GDP from 2010 to 2021. There are many ways of looking at health expenditure, and I don’t claim this one chart is definitive, but the U.K. looks to have been spending as much as any of these countries, and has also been keeping up with increases in expenditure. Interestingly, Germany comes out as the top dog in terms of expenditure as a percentage of GDP. Figure 6 will show you how well that’s going.

I included Germany in Figure 5 because its current excess all-cause mortality rate is, according to EuroMOMO, higher than at any time over the past three years. Make of that what you will.

Experts told us Sweden got it wrong. It didn’t.

Experts told us that wearing masks would stop infections. They didn’t.

Experts told us the vaccines would end infections, hospitalisations and deaths. They didn’t.

Supposed experts continue to tell us that U.K. excess deaths are down to the U.K. not spending enough on health care. It isn’t.

Finally, just a thought about Sweden and Anders Tegnell. Back in 2020 there was genuine fury whipped up against him. Calls for him to resign, terrible accusations against him personally. But now, as all-cause deaths in Finland in 2022 reached 30% higher than all-cause deaths in Sweden in 2020, where’s the outrage against the Finnish Health Minister? As each successive Covid wave in Japan has killed more people than the last, where are the calls for Japan’s Health Minister to go? The same is true in Germany, the U.K. and all across Europe.

The blind truly are leading the blind.