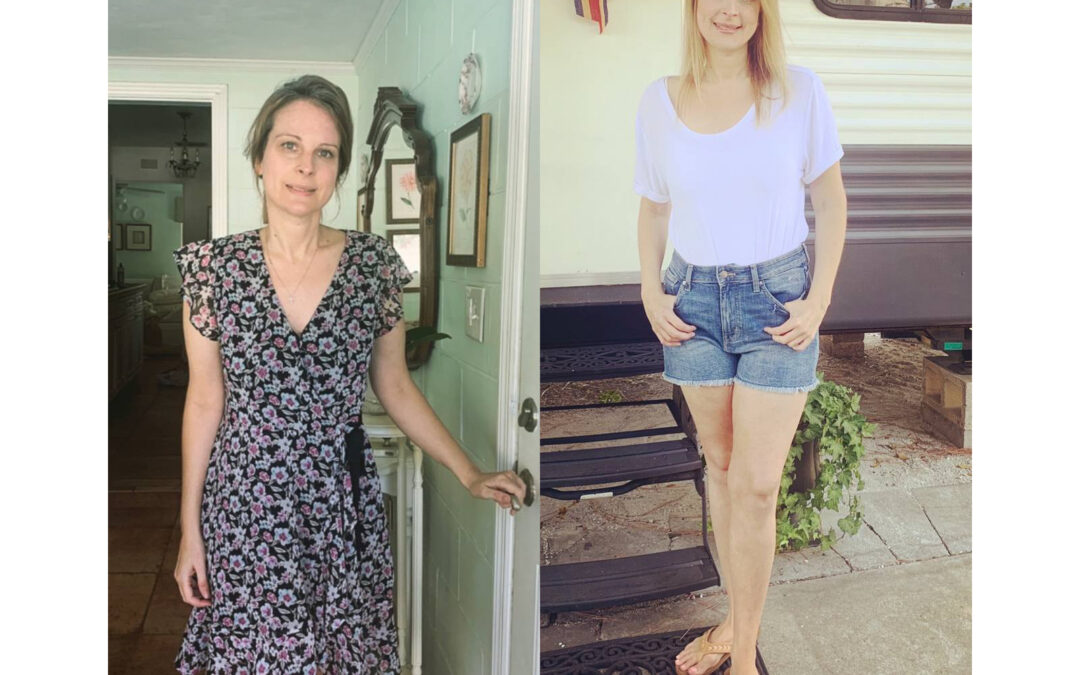 Pictures above show Audrey on the left at a low point from the viral shedding damage and then on the right after persevering through the healing path shared below.

I’m still in the middle of my journey to recovery, but I want to share my story in the hopes of helping others. I have to begin by saying that I’ve never been what you consider a healthy person. Too many antibiotics and steriods as a child, wrecked my immune system and set the stage for terrible toxicity issues later in life. At the age of 18, I came down with a terrible virus that ended up settling in my heart and causing pericarditis. At the time, doctors thought I had Lupus. Luckily it was determined that I did not, but I did have systemic candida and mercury toxicity which had created an autoimmune reaction in my body. At that point, I had to become my own doctor. After 3 years of various treatments, I did eventually get well enough to go back to school and resume life.

I maintained my health with clean eating and acupuncture for over 15 years. In addition, I ended up working in a very stressful industry that took it’s toll on my health. Fast forward to June of 2021. The looming threat of a compulsory vaccination terrified someone like myself. Once I did my homework and realized that it was not actually a vaccine, but a gene therapy drug, there was no way I was ever going to submit. Unfortunately, my former employer did mandate the vaccine. I was sad because I loved what I did for work, but knew I would not take the shot in order to stay. As threats loomed over my termination, I started to get sick and I didn’t know why. I should note that I worked around hundreds of people who were all getting vaccinated. Every time I would enter the building, my eyes would turn yellow and I felt a heaviness in my chest. My body also began to swell. I gained about 15 lbs of inflammation and my cycle was so heavy that I began to bleed onto the floor. I had a intuition that the vaccines had some level of transmission, but at the time, I couldn’t find any information about the shedding phenomenon.

In September of 2021, I was let go from my job for not getting vaccinated. At that point, I almost had a feeling of relief, because I thought I would have the opportunity to get my health back. But by mid September, my life would change forever. As I was out exercising around the lake by my house, I felt all of the blood rush from my heart. I fell to my knees and wasn’t sure if I’d be able to get back up. I think that my will to live got me back home. Once I got home, I could not get my heart rate to go down, I was pale as a ghost, and I was certain I would have a heart attack. I didn’t want to go to ER (yes the idea of dying from a heart attack appealed to me more than going to a hospital) so I tried my best to take deep breaths and calm my heart down. I managed to fall asleep that night, but I woke up to what felt like hot metal coursing through my veins. My body was on fire and I could feel my blood thickening inside my body. I had ordered pine needle tea a few weeks prior and in desperation, drank some to see if it would help. It did seem to have a thinning effect on my blood, but when I drank it, it felt as though something was getting damaged within my body. This is when I began to feel water under my skin.

I truly believed if I did not figure out what was happening quickly and find a way to treat it, I would die. I sought out a naturopathic doctor in Florida. I explained my symptoms, and while they were not familiar with vaccine shedding, they recognized that I was in a cytokine storm. After doing a live blood analysis, they found my red blood cells were clumping together. In hindsight, I wish they had done a d-dimer test, but instead they ordered extensive bloodwork on unnecessary things that ultimately revealed nothing. They suggested I do a benzonite clay bath (which proved disastrous, because my circulation was so poor and the clay, and what I now know was graphene oxide, recirculated in my body for two weeks… destroying the microvasulature and acid washing my insides). I also tried hyperbaric oxygen, DMSO, activated charcoal, NAC, ozone, and more. You name it, I tried it.

Nothing seemed to touch the metal that I felt moving in my body. It became harder to eat, drink, and walk. It felt as though everything inside me was mixing together; total destruction of whatever transports fluids in the body.

The naturopath was at a loss, and, seeing I was progressively getting worse and now passing out regularly, they insisted I go to the ER. The first ER I visited ran a series of tests. All they could find was a kidney infection, which I treated. I left with no real answers, so I made the unwise decision to go to another ER a week later. This time they admitted me into the hospital to run every autoimmune test as well an MRI. I should note while in the hospital, I was exposed to a ton of boostered nurses. As crazy as it may sound, I knew which nurses were newly boostered and which were not, because I could feel myself breathing in what felt like tiny particles of glass when a boostered nurse would enter my room. I now believe this to be the graphene being emitted when they exhale.

When it was time for me to go in for my MRI, I remember asking the tech if there would be any issue with the graphene metal in my body. Of course, he had no idea what I was talking about and said I would be fine. Unfortunately, I wasn’t. Once in the MRI tube, I felt as though my body was drying up and shrinking. I came out crying and saying, “I feel like I’m dissolving”. Of course everyone thought I was a lunatic, but there is no doubt in my mind that is exactly what happened to my body in that MRI. I would later find out that graphene does get excited from the magnetic resonance and based on where it was in my body, just kind of floating because of the damage to my microvasular system, it got pulled to the periphery of my body and honeycombed into my tissues.

What followed from November of 2021 to February of 2022 is something out of a horror movie. Layer by layer, my body began to disintegrate. Skin, muscles, connective tissues, bones, I felt it all dissolving day by day. I could no longer ingest any supplements as my esophagus and stomach were destroyed. It got so bad in December of last year, that I could no longer take sips of water. My mom had to give me small syringes of water at a time. At one point I went 3 days without eating, because I could barely get food down. My right hand began to claw from the total destruction of the tissues in my body. All this time I was still looking for answers while I lay in bed waiting for the suffering to end. I talked to many “experts” who either didn’t believe what happened to me or didn’t know what to suggest to help such a freak case.

I once again decided I needed to find answers on my own. I researched how they treated the victims of Chernobyl because I knew what was happening in my body was massive apoptosis similar to a radiation victim, and came across stem cells. I found a clinic in Florida and decided to inquire. At this point, this would be the last Hail Mary I had. I received a call from the owner of the clinic, Todd, and gave him my entire story. I was pleasantly surprised to hear that not only did he believe me, but he strongly felt that he could help me. Initially I was too scared to try anything intravenously, so I started with a product called exodrops. After some much needed assurance and education, Todd convinced me that I needed IV hydration desperately. In my frail and degenerated state, he was kind enough to come to my house and give me the life saving hydration I needed. Little by little we introduced other things like co-q 10, vitamin d, and glutathione. I saw some improvements, but ultimately it was the first treatment of umbilical cord derived mesenchymal stem cells that allowed me to take my first sip of water in four months. After two months I was able to walk again for the first time in six months. All of this was possible because of Todd’s inspiring faith, determination, and patience to help a truly helpless person like myself. I still have a ways to go, but Rome wasn’t built in a day, and neither was a completely destroyed body rebuilt again.

If anyone would like to learn about the biologic treatments that saved my life, you can email Todd at Todd@newagecells.com with any questions. He is extremely knowledgeable and cares tremendously about helping people that have had a hard time finding answers.

My story isn’t over, I have my good days and my bad days, but I’ve got a fighting chance now. I don’t think I was supposed to live to tell the tale, but I did, and I am. I hope my story can help whoever is reading it. I believe you, don’t give up, and there is hope ❤️